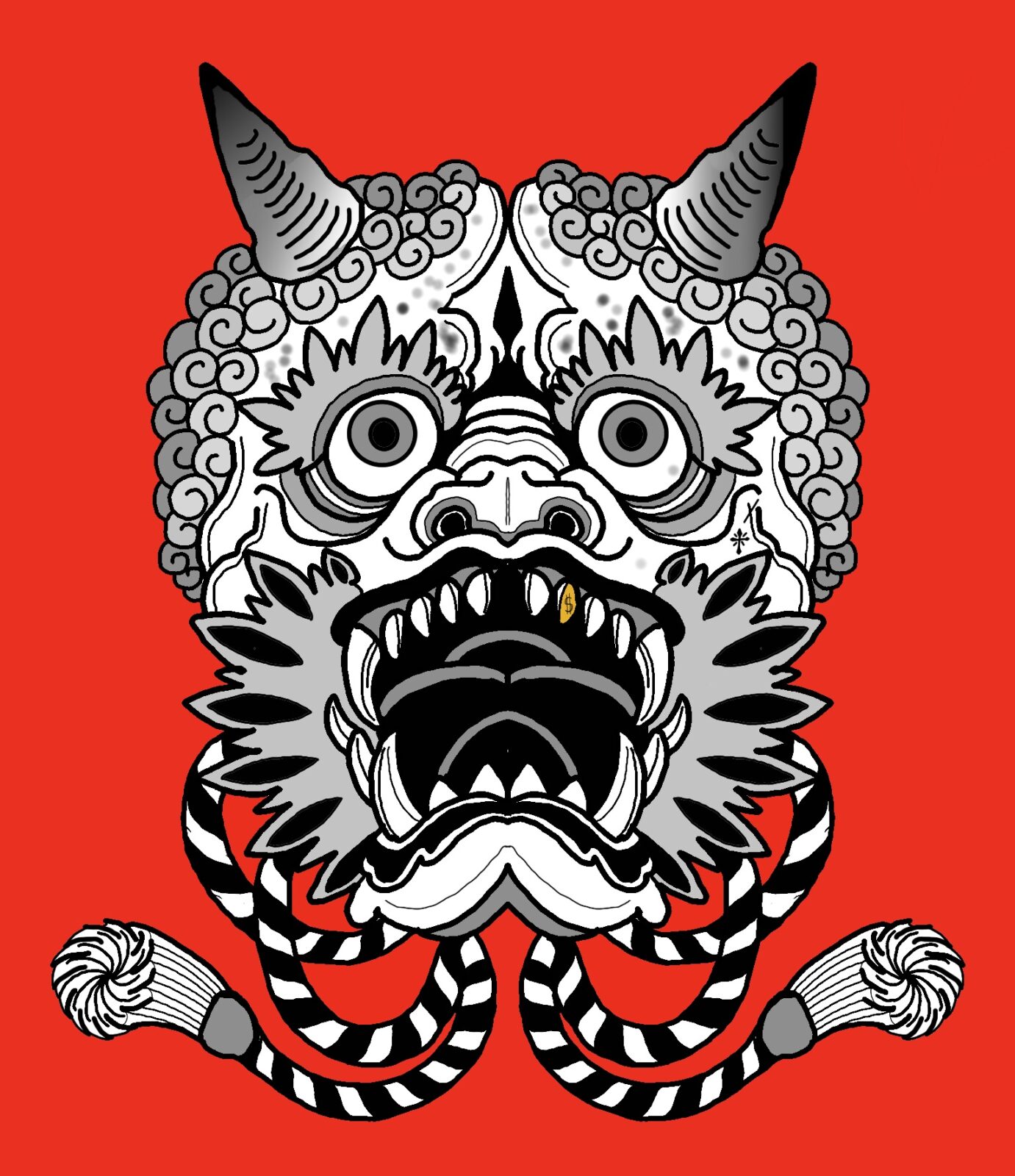 Oni is a Japanese folklore demon. It’s an image that is very popular today in Japanese tattoo art. Oni is said to possess extreme strength and to be accomplished sorcerers too. Oni means loosely translated, ‘ogre’ or ‘troll.’ The Oni, also known as Namahage, had its origin in Japanese folklore. These creatures are best described as massive ogre-like, red demon, trolls with devilish horns surrounded by a mane of wild jet black hair. These sharp, imaginary humanoids are the root of any child or adult nightmare, and that’s what this crazy folklore monster was meant to be intended to do.

The Oni has extreme strength and constitution, and many are accomplished sorcerers too. They are ferocious demons, disasters bringers, disease spreaders, and damned in hell punishers. They are often depicted wearing loincloths with a tiger skin and carrying iron clubs called kobo.

Legend has it, and this hideous beings would roam Japan’s villages, steal crops from the farmers and kidnap from the town, drag them high into mountains to never be seen again. Not only would they seize the women, but they would come as a source of protein after the naughty kids. One day after brainstorming an idea, the village’s people decided together the courage to make a deal with their demons.  The Oni being ravenous creature but not so bright was made a deal that would be impossible to accomplish. Since these ogres agreed on the term, the bet was on. The villagers bet the Oni could construct a flight of stone stairs leading up to mountains and the village’s five shrine halls by the seashore, one thousand steps in all, and the villagers would freely give the ONI women and children each year. If the Oni could not accomplish this by the next morning, the Oni would have vanished from the area and never returned.

This story was originally passed down to generation as a way to scare children into behaving. Since Japan has a strict society concerning these values of behavior and keeping in line, this folklore myth has been a success as to what its main objective was. This folklore is so popular that even today, all over Japan, festivals are celebrating on. In traditional Japanese theater, Henna mask tattoo and Oni mask tattoo are both used. But the difference is that Oni mask tattoo represents the male demon, and Henna mask stands for a female demon.

People in the village believing that these sluggish oafs would not be able to complete this project were in lifetime surprise when they saw the Oni almost complete with the flight of stairs with time to spare before their very eyes.  Quickly thinking, a villager began squawking and mimicking the morning noises of rooster waking up the village. The people of Japan dress up in this outfit on New Year’s Eve, which were depicted in children’s books and the legendry troll-like grab. These costumes consist of straw poncho robes wrapping around the body, straw boots, and a red horned mask with jagged teeth, angry eyes, with a cynical expression. On this New Year’s Eve festival celebration, men and women parading Japan’s street often carry paper Mache weapons like the club and wooden knives, taunting others as they walk by. Many Oni actors and actresses even go as far as creeping into little kids trying to scare them, screaming things like, “where are the naughty “ones? Point the cry babies at me! The red oni mask is a symbol of emoji on almost every phone and social media platform.

The red Oni mask has even found its way into the world of tattoos! The superstition lovers and the spirit world dedicated a part of their bodies to their demonic creatures. The red Oni mask is often done in a cartoonish, flash art style. An array of emotional expressions can be illustrated in brightly colored black and red Oni faces. Because the Oni is such an old myth, some people do seem to believe in this entity. Those who were more in superstitious belief get this scary mask tattooed as a form of protection to ward off evil spirits that may attempt to harm that person.  Like a dream catcher, this face of a beast filter that spirits might or might not approach the soul of that person.

However, the Oni has not always been a creature. They, too, were evil, invisible spirits to the eye. It is said that the word Oni itself is derived from the reading of On’ Yomi, Chinese’s logographic characters, which are also used in the Japanese writing system, meaning to hide or conceal. In the end, that being the case, Oni means invisible spirit or being. These invisible beings would roam the spirit world freely, seeking a host to feed off. Latching on ogres, and trolling like creatures, the Oni terrorized and seized the land.

You are not that superstitious, but you enjoy the legendry story anyway and just want the Oni mask tattoo! The Oni mask is a great initiator of conversation with a cool story to go along with. This tattoo is almost guaranteed to raise the question and attract attention, so expect to answer questions about it if you get this piece as a tattoo! The face of Oni is typical drawn and either painted red or blue. A tattoo artist is known for doing flash art tattoos or who has a good background, and then this would be the perfect project for them to take on. This tattoo is usually placed as a piece of the chest or on a leg.

The Oni goes by different names, and therefore the Oni has many different forms as well. One tip that could go a long way is not to jump the gun and choose this creature’s first design, you see. Not only is the face / mask a popular idea of tattooing, but even some accompany the body to join in. Instead, take you to look through the various variations of this ogre that haunts so many people’s dreams.